The power supply enters the main panel passing through a main circuit breaker/cut off point.  All electrical systems require a means of disconnection so that the service can be shut down quickly if any safety conditions exist.  The power is then distributed to branch circuit breakers.

Different systems are in common use today, depending on the age of the property:

knife switch: The oldest type of disconnecting means. This type consists of a blade on a hinge that makes the electric connection.

fuse blocks: This type is also called mains and range panels.  The electrical supply is cut by pulling the two fuse blocks from the panel.

breaker(s): This is the most common type of disconnect encountered today. Throwing one or more breakers cuts the electrical power. In most cases, we see a single main breaker, but often times there are "split-bus" panels where the homeowner would need to trip several breakers to effect a total power shut-down. 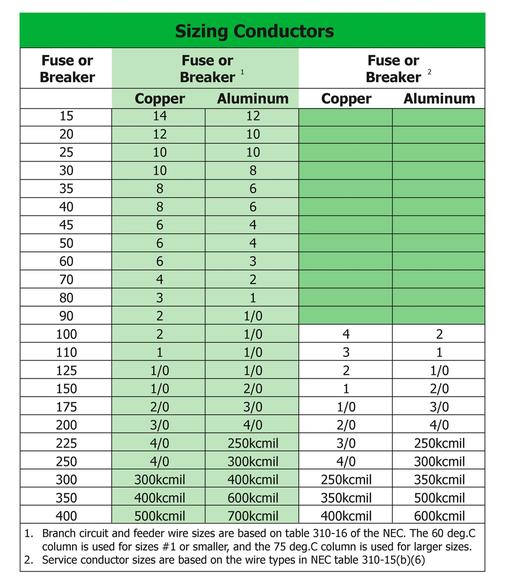 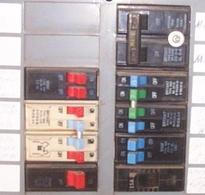 The service mast connects to the electrical meter to monitor usage and then connects to the main electric panel.  Panel clearances should be adhered to as described in the illustration below for safety purposes. 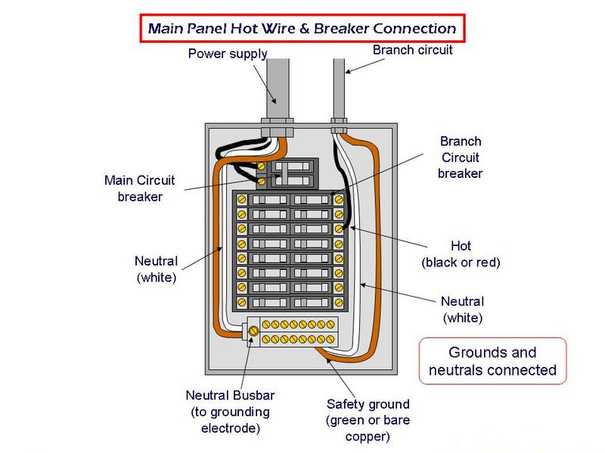 3-Wire Appliances
Prior to the adoption of the 1996 NEC code revisions, 3-wire, 240V supplies were very common. The cable assembly consists of: two 120-volt ungrounded (hot) conductors; and one grounded (neutral) conductor.

As there is no separate grounding in this type of installation, the metal frame of the appliance was allowed to be bonded to the neutral. This is no longer allowed in new construction.

4-Wire Appliances
Since adoption of the 1996 NEC, all 240V circuits are required to be 4-conductor assemblies consisting of the following:  two 120V ungrounded (hot) conductors;  one grounded (neutral) conductor; and
one equipment grounding conductor.

Some appliances still have the bond between the cabinet and the neutral, and this needs to be removed when used on a 4-wire circuit.

If a 3-wire configuration exists and one wishes to extend the circuit (for example, in a renovation), it would be considered a new installation and must be re-wired in a cable with four conductors.


There are many odd receptacle styles out there, but the two that are most common around the home are:

dryer outlets: A 240V clothes dryer receptacle has four prongs. The top prong is round and is for the ground connection. The bottom prong is shaped like an "L" and is for the neutral wire. The two vertical slots on the sides are for the two hot wires.

stove outlets: A 240V oven receptacle also has four prongs, but the neutral prong is straight and not L-shaped. It is, however, narrower and thicker than the hot-wire prongs. These two plugs have four prongs because they use two hot wires to provide the 240-volt power.

[240V 30 amp] [240V 50 amp] These receptacles have different designs so that a 30-amp dryer cannot be accidentally connected to a 50-amp stove circuit, for example.

The term "receptacle" covers all types of applications, whether they are light fixtures or wall outlets. Every habitable space in the home is required to meet minimum standards of power and lighting. A switch receptacle should never be installed inside of a room where both the top and bottom of the duplex is controlled by a switch. A switched receptacle may be acceptable to meet the 210.70(A)(1) Exception 1 for using a receptacle to meet the lighting outlet requirement in rooms that are not bathrooms and kitchens. It will not meet the 210.52(A)(1) wall spacing requirements.

All habitable spaces are required to have electrical power.  In new construction, you can expect to see an outlet at every 12 feet of wall space. Hallways longer than 10 feet are even required to have power.

Floor-Mounted Receptacles:
[Floor box] Standard wall-type receptacles pose a safety danger when mounted horizontally in a floor structure.  Dirt, dust and any spilled water will affect the outlet.  Children or pets will always play with anything on the floor.  It is always recommend upgrading floor receptacles to the approved type, with special covers.

The image at the right shows an approved floor box with its mounting hardware.   Notice the bonding jumper required on a metal cover plate. 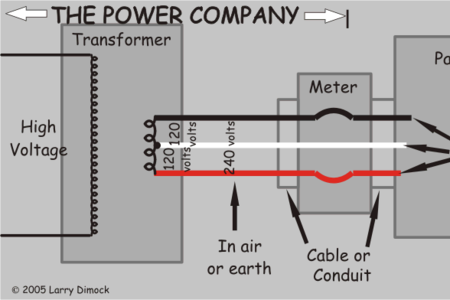 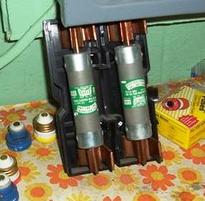 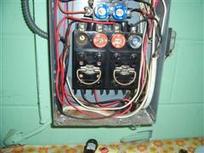 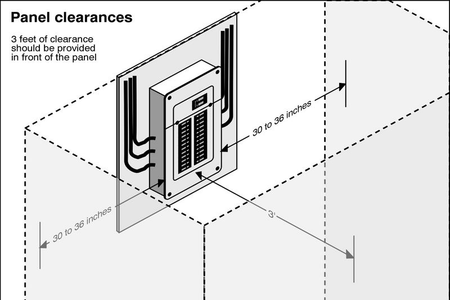 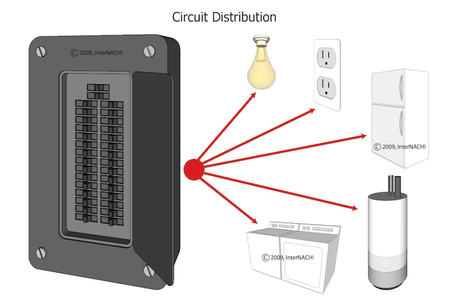 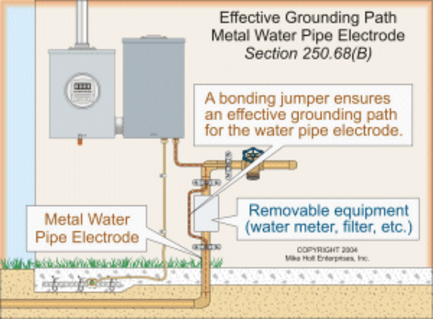 This type of system was used from the 1930s onward.  These have two fuse blocks: one acting as the main disconnect and primary over-current device, and a second block supplying power for 240-volt circuits for appliances. Some fuse panels may contain as many as four fuse blocks, commonly having one as the main disconnect, with the others supplying other 240-volt circuits for appliances.  These four block systems can provide protection to other distribution or "sub" panels.

In all cases, all the blocks must be removed to completely to cut all the power.

The image at the left is of the panel from the above pictured fuse block. Notice the two fuse blocks and the Edison base fuses. This panel has multiple double taps, which is especially dangerous, as there is one free circuit available which could be safely supplying a separate circuit. (Photos courtesy of Dave Macey)

The service-entrance conductors are located between the terminals of the service equipment (main disconnect) and a point usually outside the building, clear of building walls, where they are joined by a tap or splice to the service drop or overhead service conductors.

The service point is the point of connection (indicated by the splice) between the facilities of the service utility and the premises' wiring.

The service SE (service entrance) cable enters into a protected or sheathed or service mast with a goose neck on top to protect from water entering the system. 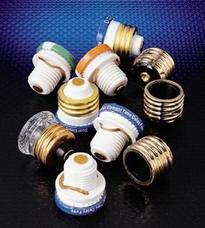 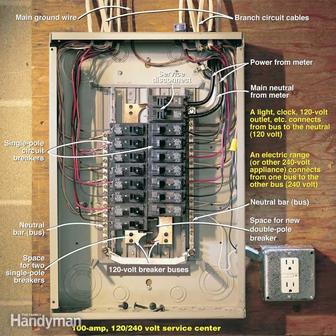 These fuse-style panels use a fuse block as both the primary over-current protection and also as the cut off means. These fuse blocks contain two cartridge (or "shotgun shell") fuses.

To disconnect the power to the house, this block (or blocks) must be pulled.

These fused panels are normally rated at either 60 or 100 amps.
In this case, the fuses are each 100 amps, indicative of a fuse panel installed in the 1960s. 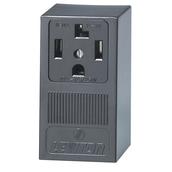 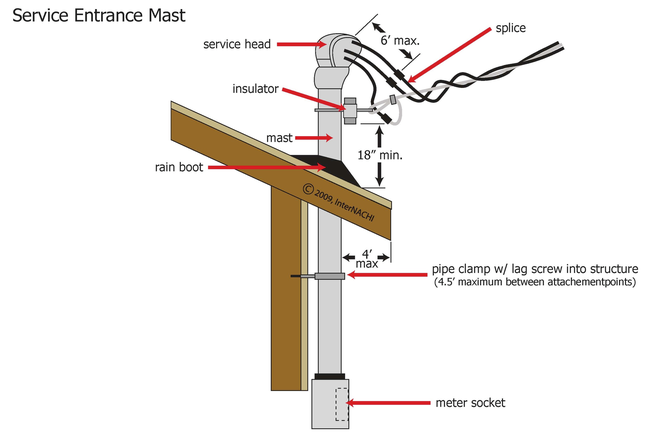 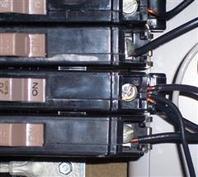 The below information is presented as a general overview of a home electrical system.

​INSPECTION JUNCTION       HOME INSPECTIONS FOR THE GRAND VALLEY AND BEYOND 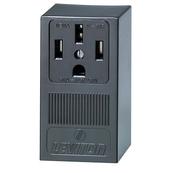 These fuses are used in many older panels.  They have the same thread for other applications, such as the common light bulb. This creates a safety problem, since a higher-amperage fuse can be screwed into a location supporting lower-amperage conductors, this turns the conductor into the fuse and is very dangerous.

S-type fuses and adapters are recommended to ensure that the circuits cannot be overloaded. These adapters screw into the standard fuse location and reduce the thread size down. Various sizes are available, from 15 to 30 amps, and allow only the correct amperage type-S fuse to be installed. Once installed these adapters cannot be removed.

These fuse systems met average family's needs in the 1950s and 1960s, but that's now exceeded by modern demands.

Most circuits in U.S. modern construction are wired with non-metallic sheathed (NM) cable designated type.  This wiring is generally referred to by the brand name "Romex". This type of cable is the most cost effective for a given size and is appropriate for dry indoor applications.  Below is a list of metallic conduction materials found in modern wiring.

copper:  The best conductor in common use.  Copper has low electrical impedance, so a relatively small conductor can deliver a lot of power over long distances without significant power loss or heat generation.

tinned copper: This material is sometimes seen on older properties. Copper is tinned for two reasons: to help with soldering connections; and to prevent the copper from reacting with old rubber insulation.

aluminum: This is a good conductor of electricity but has higher impedance to the flow of electrons, which means that larger conductors need to be used for any amperage rating. A lot of residential branch circuit wiring from the mid-1960s to the late 1970s used aluminum due to the higher cost of copper, but was found to be unreliable.  It is recommended that clients to talk with their insurance agent about whether the presence of aluminum wiring in their home is a problem that requires changes to their policy's language.  Wiring-device binding terminals for use with aluminum wire have been marked CO/ALR since the early 70s, which stands for “copper/aluminum revised."
the word "aluminum" or the initials "AL" on the plastic wire jacket also indicates aluminum conductor material.

copper-clad aluminum: coating aluminum in copper was an attempt to overcome the issue of oxidization of the aluminum conductors that was leading to failures.  It did not have the failures associated with pure aluminum and is considered safe. However, copper-clad should be sized the same as normal aluminum.

The table below acts as a guide for the most common conductor sizes used in residential branch circuits, along with their maximum permitted breaker or fuse sizes.

These are probably the most common type that home inspectors will come across, as they have replaced fuse panels over the last 40 years or so. As we saw for fuse panels, breakers are far from foolproof and require some particular checking.

Breakers fall into four categories, which we'll look at in more detail:

240-volt double breakers:   All breakers supplying 240 volts are required to have the handles tied together by a listed handle tie.  Sometimes, the breaker is molded with this connection in place, and sometimes they are linked by a listed handle tie.
A 240-volt circuit breaker also acts as the main disconnecting means in modern panels, disconnecting all the electrical power in the home.

120-volt single breakers:   A regular 120-volt circuit is fed from one bus bar only. Also in use are tandem breakers, which are 120-volt breakers that feed two separate circuits, these are controlled by its own handle and should not be linked.   The rating of the breaker should not exceed the rating of the conductors, unless allowed by 240.4 (E) or (G) of the NEC.  This can cause the breaker to overheat and fail.

Square D and Cutler-Hammer manufacture single-pole, 120-volt breakers who have their products listed for two conductors. These should not be confused with double-tapped breakers, where more than one conductor has been incorrectly connected to a single breaker.

The picture to the right shows a "triple-tapped" breaker. A condition like this should be evaluated and repaired by a licensed electrical contractor for safety.

GFCI breakers:   Ground-fault circuit-interrupting breakers are designed to protect circuits and their users from ground faults. GFCIs are not required on all circuits and, in many homes, the locations that require this protection have their own GFCI outlets. if a GFCI breaker is used, it will provide protection to all receptacles in that branch circuit.

GFCI breakers have trip and reset buttons to ensure that they are working correctly.  Testing the trip the breaker using the test button ensures that the circuit has indeed been switched off.

The image on the right shows both a GFCI breaker and a receptacle. Either is acceptable to protect a damp location, or a circuit to a damp location. Additional locations are listed under Section 210.8 (A) and (B) of the NEC.

AFCI breakers:  These are called Arc-fault circuit interrupters. This type has been required in new construction since the 1999 edition of the NEC.  These breakers are designed to trip if they sense arc faults in the circuit, which are caused by damaged wiring.  The image to the right shows of a pair of AFCI breakers. Notice the blue test buttons, and also the second conductor that connects the breaker to the neutral bus. (This is not a double tap.) Many early Square D AFCI breakers have been recalled due to manufacturing defects.